The setting of The Lake Hotel is such that our guests are fortunate to enjoy a vast array of wildlife on display before their eyes on a daily basis. It would not be unusual to see wild deer wandering across the lawn or hotel driveway as guests come and go.

The variety of birds inhabiting the National Park adjacent to the hotel is so diverse and colorful that many guests find themselves noticing these friendly creatures more than ever before. The reintroduction of the wild white-tailed sea eagles is a wonderful project and these majestic creatures are a sight to behold swooping across the lakes and mountains in full view of hotel guests.

Eagles near the Lake Hotel

The Lake Hotel welcomes the return after nearly 100 years of the Sea Eagle / White Tailed Eagle. On many occasions we have seen the Eagles fly through our lake view panorama at The Lake Hotel, once even taking a fish out of the lake right in front of our Devil’s Punchbowl Bar.

It was the first recorded sighting of the Eagles fishing for themselves as they had been fed fish left out for them by Dr. Allan Mee who leads the re-introduction programme for the previous months. We are hopeful some will stay at the hotel right now and we look forward to the day they start to nest. It will be in the Killarney area because it was their point of release, can you imagine with our view of Lakes, Mountains, a Castle, Native Red Deer and now the Eagles?

The Killarney Deer have been here since the Ice Age, long before humans, thankfully their rights have been preserved as they are now protected by Law from hunting.

It is said that “Tuan” the King of the Deer was given rights of free passage by Fionn Mc Cool and the Fianna in these Kerry Mountains many years ago. Rumour also states that his bloodline is in the present Killarney herd. Today their rights are protected by the Management at The Lake Hotel and they are allowed free passage on their magical journey by the lakeshore in Killarney.

Birdwatching From The Lake Hotel

2007 saw the reintroduction of the White Tailed Sea Eagles in the Killarney National park, 100 birds we released over 5 years and is now proving to be a success with new chicks taking flight in many areas around Ireland. This year 2016 saw the flight of a chick from the nest on the Brown Island on the Lakes of Killarney.

The Lake Hotel is an ideal location for visiting birdwatchers wishing to explore the region. In front of the hotel, the glistening waters of Lough Leane reflect the images of Torc, Eagle’s Nest and Purple mountains which rise to nearly 1,000 meters.

2015 saw the arrival of a pair of White Egrets that have made Castlelough Bay their home in open view for all our guests from the rooms, restaurant, bar and around the Castle.

The largest of Killarney’s three lakes, Lough Leane overlies limestone on the northern and eastern shores and sandstone on it’s southern and western shores. This geological divide has created a wide variety of habitats in and around the lakes, from wooded mountain slopes and islands to shallow reed-filled bays.

These bays, in particular, attract a wide range of wildfowl (23 species) and wader (17 species). Red-breasted Merganser, Tufted duck, and Teal all breed, while rarities such as Garganey, Goosander, Green-winged Teal and Ring-necked Duck have occurred. Woodcock, Common Sandpipers and Snipe are also common breeding birds, while Jack Snipe are frequent winter visitors. Castlelough Bay is located at the eastern end of Lough Leane and has a number of small reedbeds located on its shores.

The largest of these lies in front of the Lake Hotel and is best viewed from the raised pier nearby. From here one can get excellent views of Great – Crested Grebes, Sedge Warblers, Tufted Duck and Coot, with a good possibility of seeing the elusive Water Rail. The reedbeds attract a good Swallow roost in the autumn.

Red deer are often seen in the woods at the edge of the reedbeds, and there is a good chance of seeing otters here in the morning.

Within a few kilometers can be found the most diverse range of woodlands in Ireland. The nearby Muckross peninsula contains Ireland’s only Yew wood, covering 28 hectares. The mountain slopes nearby hold woods of Sessile Oak and Beech, as well as mature stands of Scots Pine, Douglas Fir, Western Hemlock and other Conifers. There is also an interesting avian fauna, including Long-eared Owl, Jay, Sparrowhawk, Siskin, and Crossbills. Wood Warblers and Common Redstarts are occasional.

The shores around Ross Castle are fringed by extensive Alder woods where Blackcap and other Warblers breed, and which in winter attract large flocks of Siskins, Redpolls and other Finches, as well as good numbers of wintering Chiffchaffs. Dipper and Kingfishers occur on nearby rivers and a small flock of Greenland White-fronted Geese winter on bogs in the National Park. Twenty kilometers west of Killarney the estuary of the rivers Laune and Maine form a rich feeding ground for many birds.

The mouth of the estuary is protected by three spits, Cromane and Rossbeigh on the south shore and Inch spit on the north shore. This whole area, Castlemaine Harbour provides a wonderful day’s birding against a spectacular backdrop of high mountains. 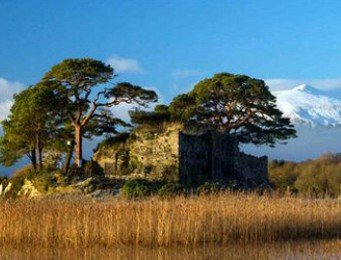 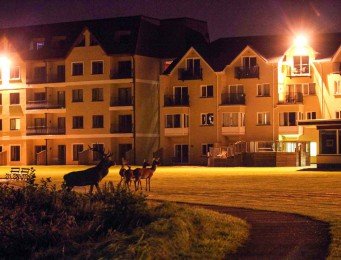 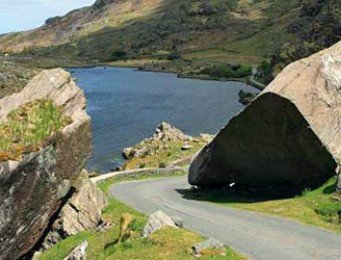 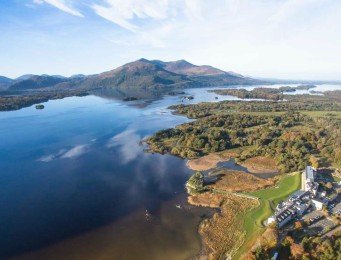