The Lake Hotel took home three prestigious titles from the Irish Hotel awards this week. Following an in-depth inspection earlier this year, the family run property was named Ireland’s Best Four Star Hotel and, the renowned title of Ireland’s Best Chef was presented to the hotel’s Executive Chef, Noel Enright. In addition, and in keeping with its reputation for culinary excellence, The Lake Hotel also received the award for Ireland’s Fine Dining Experience.

Having received both Regional and National titles in the above categories, the hotel was also awarded Munster’s Best Gourmet Getaway, totalling seven accolades received by the Killarney hotel. Sales and Marketing Manager, Sheila O’Callaghan commented, “We are extremely proud of our team. To be recognised for excellence across so many categories is a fantastic achievement and to take three overall titles is phenomenal. These awards are a true testament to the hard work and dedication of our outstanding team.”

Shane Smith, Director of NI Media, who runs the Irish Hotel Awards, remarked, “Thankfully, the industry is getting back on its feet. This is great news for the sector and the standards that are being met are simply outstanding”.

To be named Ireland’s Best Four Star Hotel recognises all areas of the guest experience from check in to departure and all the services provided in between, an accolade that commends the efforts of every department within the hotel. The Lake Hotel is owned and operated by Huggard brothers, Tony, Niall, Colman and Joe. Each year, the family invest in the enhancement of the hotel, ensuring the highest of standards are maintained for guests.

Executive Chef Noel Enright, awarded Ireland’s Best Chef, has led the kitchen team at The Lake Hotel since 2014. Noel manages a team of chefs for The Lakeside Bistro, The Piano Lounge and The Castlelough Restaurant. Noel & his team have designed seasonally attuned menus, using the best of locally sourced produce. The Castlelough Restaurant receiving the accolade for Ireland’s Fine Dining Experience applauds exemplary service and exquisite dining, and this is due to the hard work and commitment of Restaurant Manager, Javier González, Chef Noel Enright and both their teams. 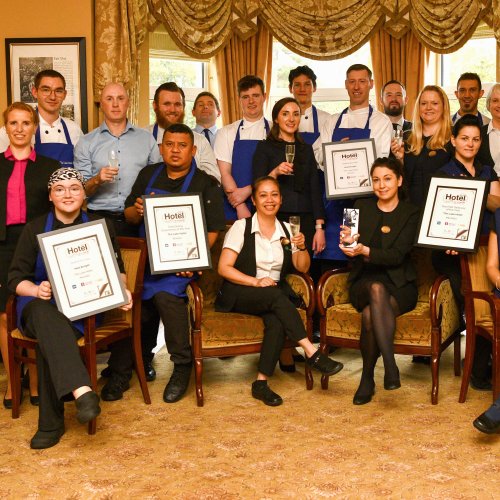